If you follow me on Twitter you know that I am currently having a bit of a PhD melt-down. I have calmed down a bit and made around a million to do lists and now feel like I can actually write a blog post. I am ridiculously stressed about my thesis and whenever I am that way, I escape into reading (mostly predictable books that don’t stress me out further) – which is why I read the first seven books in the Psy-Changeling since the beginning of the year and have not been writing reviews for any. In general, blogging will probably be something I will have to scale back on because I want to finish my PhD this year and I won’t have the mental capacities to write about all the books I read for fun.

So, here are some quick thoughts about the series and then the seven books ranked from least favourite to favourite because who doesn’t love a good list. I really do enjoy Nalini Singh’s writing and I vastly prefer the world-building of this sci-fi-fantasy-romance series to her other series I have started reading (Guild Hunter). While the focus in each book is very much on the prospective couple it follows, she always advances the main plot line in a way that I find highly satisfying. What works exceedingly well is her characterization – the characters are always recognizable as themselves even if they are not the focus of the book in question.

This series is set 60 years in the future, in a world dominated by the Psy, a race with mental capabilities that has decided to eliminate all feelings from themselves (a program called The Silence that has been going on for 100 years). There are also Changelings in this world (we mostly follow leopards and wolves) as well as humans. These books are ridiculously fast-paced and I basically sped through each and every one once I started it. The titles and the covers are hilariously awful (and don’t get me started on the fact that the men on the covers all look the same, no matter how they are described in the books, where they are actually quite diverse; do you want to guess which of these pasty-white men are black or brown in the books?): 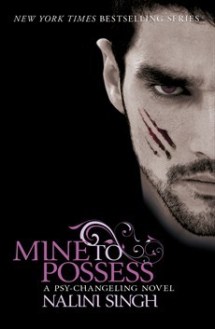 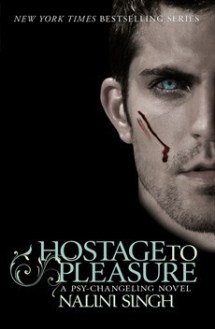 But without much further ado, here are the books I read so far ranked (full disclosure, it is mostly a ranking of how much did the men set my teeth on edge):

This book was mostly really bland. I am also not a fan of Singh’s tendency to give many of these women horrific pasts – but at least in most of the other books the men do not blame the women for these pasts.

This book closely mirrors the first book and as such did not quite work for me. While I really liked Faith and her psy power, I thought Vaughn was mostly a possessive ass. And  “you will have to restrain me so that I don’t accidentally hurt you during sex” will never be a plotline I don’t hate.

So angsty! I really liked that the two main characters had a history and Talin is WONDERFUL, but again, Clay set my teeth on edge. Reading Goodreads reviews for this made me lose a bit of hope to be honest because, wow there are way too many people seriously lacking empathy. Way too often they place the whole blame for everything that happens here onto Talin without taking her (seriously horrifying) back story and her trauma into account.

This book and its focus on family and sibling bonds did work quite well for me. I thought Ashaya was a really well-rounded character and Dorian’s trauma made me excuse some of his less than great behaviour – especially because he realizes himself what an ass he sometimes is.

While there is, again, this over-the-top horrific back story, I found the way the couple dealt with it really refreshing. Judd really tries to do good by Brenna and his family – and this time around I really was not quite sure how the book would end.

I really liked this introduction into the world and its stakes. I thought Sascha was a spectacular main character and Lucas actually quite charming. I really liked the way they played of each other and challenged each other.

I really enjoyed this. Riley is my favourite BY FAR of all the men in this series (only Judd comes even close) because, shocker, he not only apologizes the one time he overstepped he actually changes his behaviour, he is also pretty funny and honest. Mercy is kickass in just the way I like my heroines to be and those two actually communicated and figured out a healthy way to be with each other.

2 thoughts on “I read the first seven books in Nalini Singh’s Psy-Changeling series in three weeks, so here they are ranked instead of reviewed.”