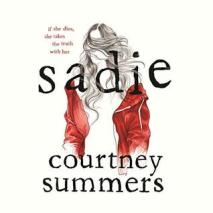 A missing girl on a journey of revenge. A Serial―like podcast following the clues she’s left behind. And an ending you won’t be able to stop talking about.

Sadie hasn’t had an easy life. Growing up on her own, she’s been raising her sister Mattie in an isolated small town, trying her best to provide a normal life and keep their heads above water.

But when Mattie is found dead, Sadie’s entire world crumbles. After a somewhat botched police investigation, Sadie is determined to bring her sister’s killer to justice and hits the road following a few meager clues to find him.

When West McCray―a radio personality working on a segment about small, forgotten towns in America―overhears Sadie’s story at a local gas station, he becomes obsessed with finding the missing girl. He starts his own podcast as he tracks Sadie’s journey, trying to figure out what happened, hoping to find her before it’s too late.

This book broke my heart. I listened to the ending of this walking to the garage to pick up my car. And I had to wait around a corner from it to gather my feelings and stop crying. Now, I am famously easy to cry but I don’t usually do it outside, so this really does speak to how hard this book hit me.

This book follows two perspectives, that of Sadie whose sister has been killed and who is single-minded in her pursuit of the murderer, and that of the podcast The Girls, where West McCray is trying to figure out what exactly happened to Sadie after she went missing. These dual perspectives are the book biggest strength and listening to the audio version of this is something I highly, highly recommend. It is produced with a full-cast and impeccably done so. As a result, for me the podcast element worked exceedingly well and I always wanted to follow this part of the narrative. Sadie’s narration is brittle and broken and full of spiteful strength, which I appreciated but also made for a stressful listening experience (and I don’t always deal well with stressful). Her life is on a collision course with something awful, you can just tell, and the loss of her sister is only the newest of a whole string of horrible events.

I haven’t read very many young adult novels this year but this one I can wholeheartedly recommend. It is compulsively readable, incredibly heartbreaking, and important. Courtney Summers manages to tell a great story while also keeping her eyes on the climate that makes these crimes against girls possible. She shows great restraint in never letting the political core overshadow the storytelling, but the core makes her book all that more impressive.