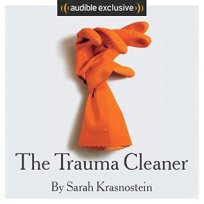 Husband, father, drag queen, sex worker, wife. Sarah Krasnostein’s The Trauma Cleaner is a love letter to an extraordinary ordinary life. In Sandra Pankhurst she discovered a woman capable of taking a lifetime of hostility and transphobic abuse and using it to care for some of society’s most in-need people.

Sandra Pankhurst founded her trauma cleaning business to help people whose emotional scars are written on their houses. From the forgotten flat of a drug addict to the infested home of a hoarder, Sandra enters properties and lives at the same time. But few of the people she looks after know anything of the complexity of Sandra’s own life. Raised in an uncaring home, Sandra’s miraculous gift for warmth and humour in the face of unspeakable personal tragedy mark her out as a one-off.

This is an incredible portrait of a deeply complicated woman – and I adored it. Sandra Pankhurst owns a company specializing on trauma cleaning (after suicides and violent crimes but mostly for people with hoarding tendencies). Sarah Krasnostein followed her work for months and tells in alternating chapter of Sandra’s clients and her own, tumultuous life.

Sandra, who was born as Peter, adopted by a deeply dysfunctional and abusive family, married young and had two children before leaving her family. She is a deeply complicated person and a completely unreliable narrator as she freely admits to having forgotten large parts of her life due both to her own trauma and drug abuse. Krasnostein manages to painting a wonderful portrait nonetheless. I especially admire that she let Sandra be contradictory and difficult without trying to paint a coherent picture: because Sandra’s life does not lend itself to coherence and her contradictions are fascinating. She is able to extend an utmost sympathy to her clients, while at the same time being callous in the way she talks about her ex-wife, who she left without any financial assistance and who had two raise her two sons on her own. She was part of the LGBTQIA-scene before it was legal and now supports conservative politicians. She is empathetic and lovely to people she hardly knows and has not spoken to people she was close with in the 70s in decades.

My favourite parts were in the present, following Sandra and her empathy while dealing with her clients. I appreciated the way in which Krasnostein painted vivid pictures of very difficult living situations while avoiding sounding voyeuristic. The women Sandra became has my utmost respect even if she has done some horrible things to get there. Her life story is an interesting and in parts harrowing one, and it is a story that is well worth knowing.

The audiobook is extremely well done and I cannot recommend it high enough. The narrator, Rachael Tidd did a wonderful job letting Sandra come alive in my ear. I think the excellent narration lifted this book to a definitely four-star read for me.

Lastly, I do feel the need to point out that this book contains some seriously harrowing scenes; there is one rather lengthy and detailed rape in the middle of the book that might be triggering for some readers.

14 thoughts on “Review: The Trauma Cleaner by Sarah Krasnostein”