Apparently, when my brain is fried and I am feeling a bit ill, I crave Urban Fantasy or even Paranormal Romance now. I am having a really tough month and needed something that could keep my brain engaged while distracting me from my swirling thoughts (if I could kick past Hannah’s butt for thinking a PhD would be a wonderful idea I would probably do it at the moment). These books did just that. I don’t have all that many thoughts which is why I decided to do a mini overview review of the first three (ish) books of the series. 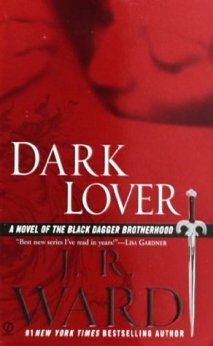 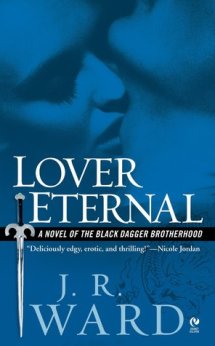 I read each of these books pretty much in a day, which if you have spent any amount of time on my blog you will know is unusual for me. So these books did keep me engaged and willing to keep turning the pages. But I also skipped a lot of stuff here, especially in the third book (I don’t even know if what I did counts as finishing the book which is why I kept it off my Goodreads).

The first book in the series was wildly entertaining, parts of it unintentional I am sure. I kept chuckling about the names (Wrath, Zsadist, Rhage, and so forth – like seriously?), the character descriptions (long black hair falling from a widow’s peak), the constant inclusion of hip hop songs, and lots of other things. But, I did kind of dig the main couple. I thought Wrath was a believable male love interest that did not make me want to claw my eyes out (which is my usual reaction a lot of the time) and his back story did make him sympathetic without being over the top. And Beth was wonderfully brave and funny and just really nice.

The second time around my reaction was fairly similar; the names did still make me groan and the constant mention of everybody’s leather pants really dated this book. But unlike the first book, I could not quite get on board with the main couple. Yes, Mary was all kinds of wonderful but she bordered on being saintly in a way that did not quite make her feel believable. And Rhage’s alter ego (a dragon I might add) was a lot more compelling than he himself. And some scenes that I am sure were meant to be deep and meaningful fell flat for me. I also thought the pacing was really odd and the last part of the book was mostly used as a set up for the next book. This was also the book where I seriously started to skimread all the sections involving the antagonists.

So, yes, overall, these books did exactly what I needed them to do but I have no intention of continuing with the series. Paranormal Romance is just not a genre for me. The emphasis on the romance part of the story is just not something I am super keen on and these ones were the opposite of a slow burn.