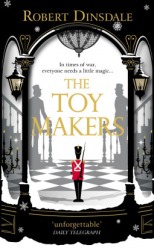 Verdict: Uneven, very description heavy, not quite my cup of tea.

Find it on goodreads.

Do you remember when you believed in magic?

The Emporium opens with the first frost of winter. It is the same every year. Across the city, when children wake to see ferns of white stretched across their windows, or walk to school to hear ice crackling underfoot, the whispers begin: the Emporium is open!

It is 1917, and London has spent years in the shadow of the First World War. In the heart of Mayfair, though, there is a place of hope. A place where children’s dreams can come true, where the impossible becomes possible – that place is Papa Jack’s Toy Emporium.

For years Papa Jack has created and sold his famous magical toys: hobby horses, patchwork dogs and bears that seem alive, toy boxes bigger on the inside than out, ‘instant trees’ that sprout from boxes, tin soldiers that can fight battles on their own. Now his sons, Kaspar and Emil, are just old enough to join the family trade. Into this family comes a young Cathy Wray – homeless and vulnerable. The Emporium takes her in, makes her one of its own. But Cathy is about to discover that while all toy shops are places of wonder, only one is truly magical…

I struggled with this. It took me about two months to read and I never felt compelled to pick it up. This is not a bad book by any means and I am still struggling to pinpoint what did not work for me. So stick with me as I am trying to figure out my thoughts.

I adored the first chapter and was absolutely convinced I would love the book to pieces. It brilliantly introduces Cathy, knocked-up and desperate, who flees her parents’ home to find work in Papa Jack’s Emporium. Her sense of desperation is wonderfully juxtaposed with the wonder of her new work place and here the immersive and inventive descriptions worked really well. When the Empirium closes for spring and summer, she decides to stay and hide as she has nowhere else to go. This is a trope I struggle with in books: lying and hiding makes me anxious.

What developes next is a love triangle between Cathy and Papa Jack’s two sons: Kasper and Emil. I have no patience for love triangles; especially not for those between brothers. While it makes sense in the way the two have always been in direct competition (mostly for their father’s approval), it’s just not something I enjoy in books.

In general, I thought the characters were the definite weak point of this book. While Cathy is nicely developed (espcially in the first half of the story) and I couldn’t not root for her and her courage, I found the brothers caricature-like and Papa Jack a non-entity. Perhaps this book would have worked better for me had it been written in a first person perspective. This way I would have been able to spend more time with Cathy and less time with the waring brothers. I also found Emil and Nina to be very abrasive characters whose motivations did not always quite work for me.

I also figured something out just now: the book was overly descriptive. It feels like the majority of words were used to describe the Emporium in incredible detail; there must be hundreds of inventions described. And while I enjoyed this at the beginning, when the reader followed Cathy’s awe, it did not quite work for me later in the book when darker themes started to emerged. Then I felt the whimsy of the description detracted from the story.

I received an arc of this courtesy of NetGalley and Random House/Ebury Publishing in exchange for an honest review.

Have you read The Toymakers? What were your thoughts? Has it happened to you recently that you loved the first chapter of a book but not much else?

7 thoughts on “Review: The Toymakers by Robert Dinsdale”