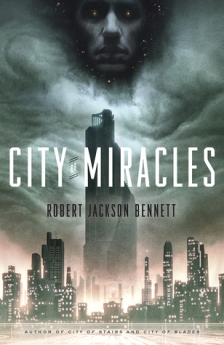 Published by Broadway Books, May 2017.

Revenge. It’s something Sigrud je Harkvaldsson is very, very good at. Maybe the only thing.

So when he learns that his oldest friend and ally, former Prime Minister Shara Komayd, has been assassinated, he knows exactly what to do — and that no mortal force can stop him from meting out the suffering Shara’s killers deserve.

Yet as Sigrud pursues his quarry with his customary terrifying efficiency, he begins to fear that this battle is an unwinnable one. Because discovering the truth behind Shara’s death will require him to take up arms in a secret, decades-long war, face down an angry young god, and unravel the last mysteries of Bulikov, the city of miracles itself. And — perhaps most daunting of all — finally face the truth about his own cursed existence.

This was absolutely bloody fantastic. Robert Jackson Bennet managed to somehow add even more layers to an already layered series, enough so that I contemplated re-reading the first two books just to able to appreciate them even more. It is an impressively wonderful trilogy and a world I am very sad to have to leave.

This third and last book of this marvelous trilogy follows Sigrud; after the events of the previous book he has lived off the grid when the news of Shara’s death reach him and he decides to do what he considers he does best: revenge. While he was more at the sidelines in the earlier books, he now takes centre stage and the book’s structure represents this.

I adored this: I found Sigrud’s journey fascinating and him as a character wonderfully well-rounded and flawed, which is especially brilliant because he could have so easily become a walking trope. I am not usually a fan of the brooding, suffering, angry protagonist but him I adored. His development over these three books is believable and heartbreaking. Every single one of his actions, even the brutal ones, is infused with neverending sadness. He often acts without thinking and as a reader we follow: it is only in the aftermath of slaughter that Sigrud (and in extension the reader) pauses to consider that these were people, people with families of their own. There are no easy answers here and this is a big strength of this book and of Sigrud as the main focus. But even in all this sadness and horror, there is a sense of hope, of maybe finding a way to survive just for another day and another chance at making amends.

This is a very clever series, one that trusts its readers to think along and I love that in books. I had some things figured out in advance this time and could appreciate how brilliant the pieces were out in place. Still, even knowing what was to come in parts, this packed such an emotional punch when the big finale came along.

First sentence:
“The young man is first disdainful, then grudgingly polite as Rahul Khadse approaches and asks him for a cigarette.”

One thought on “Review: City of Miracles (The Divine Cities #3) – Robert Jackson Bennett”